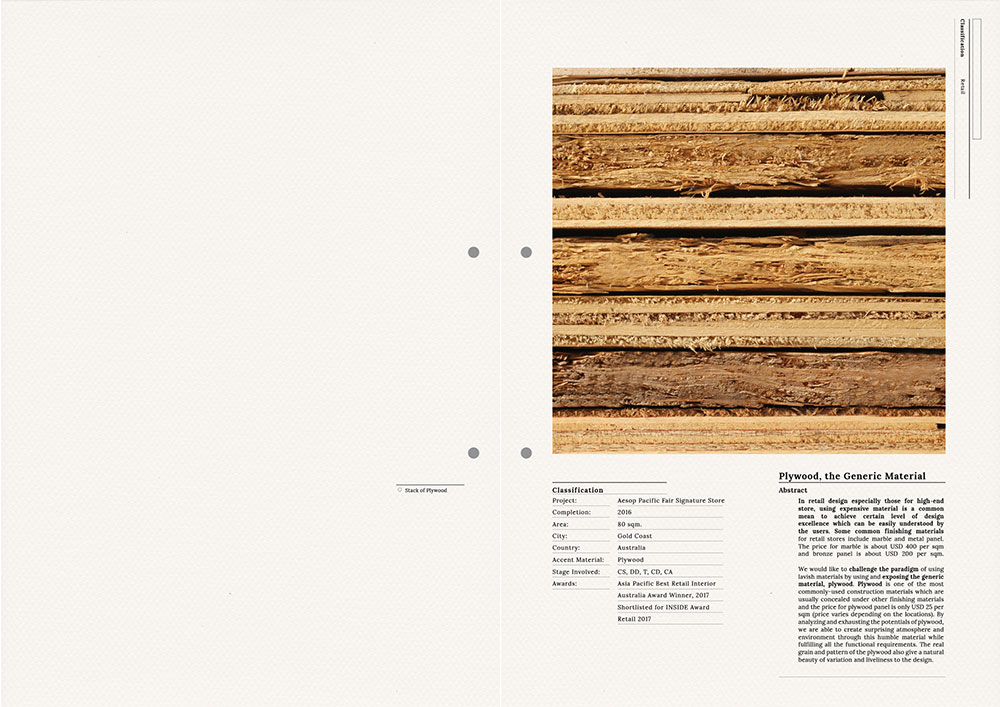 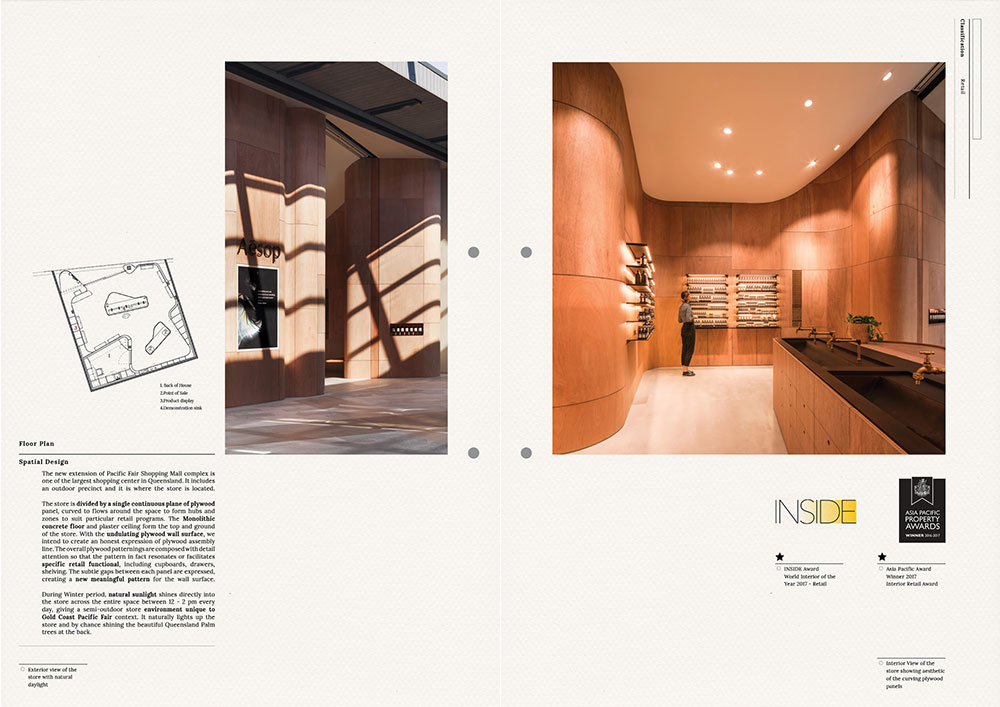 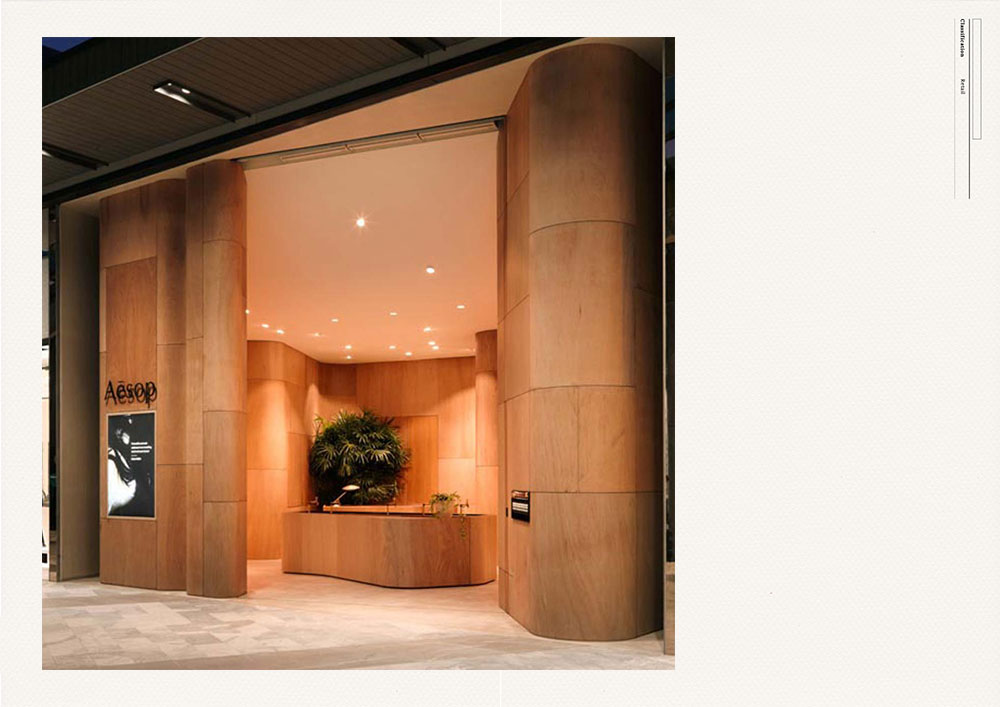 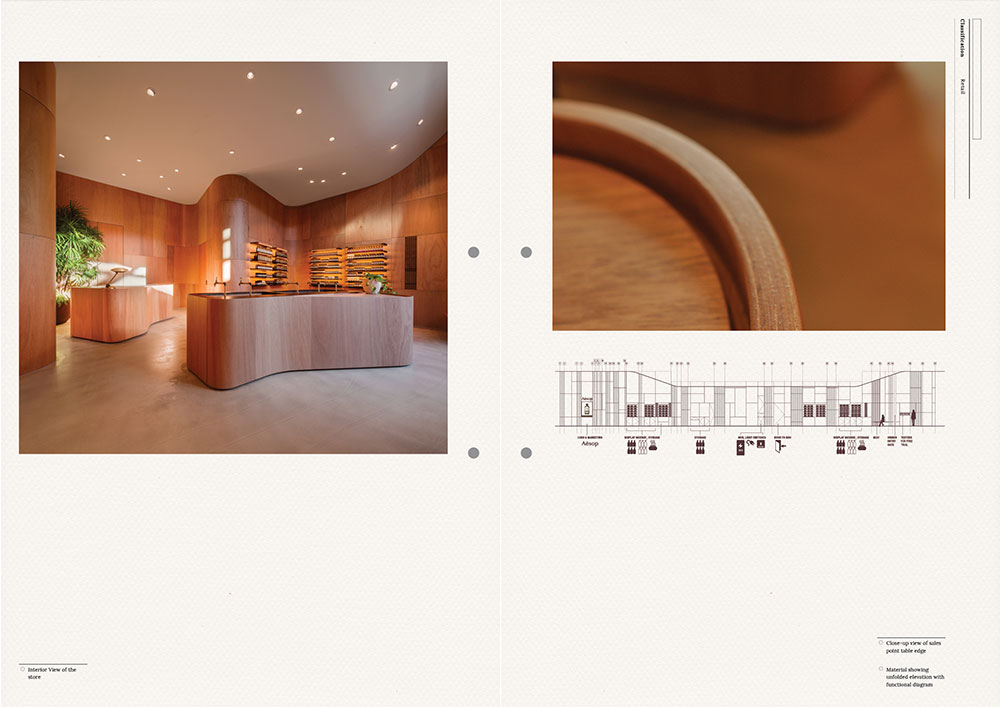 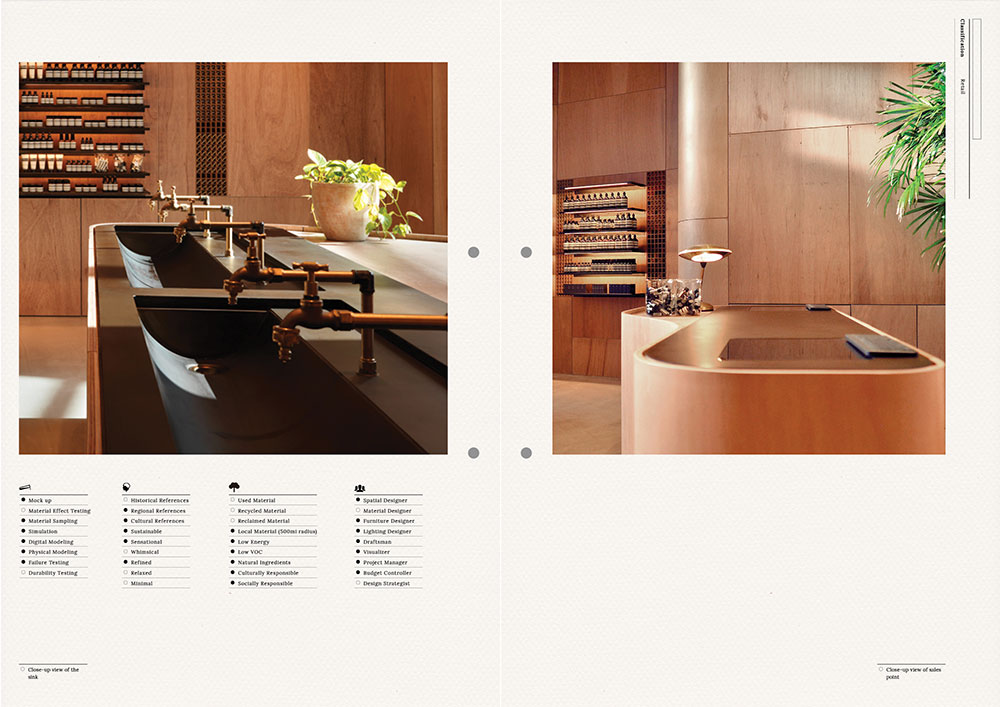 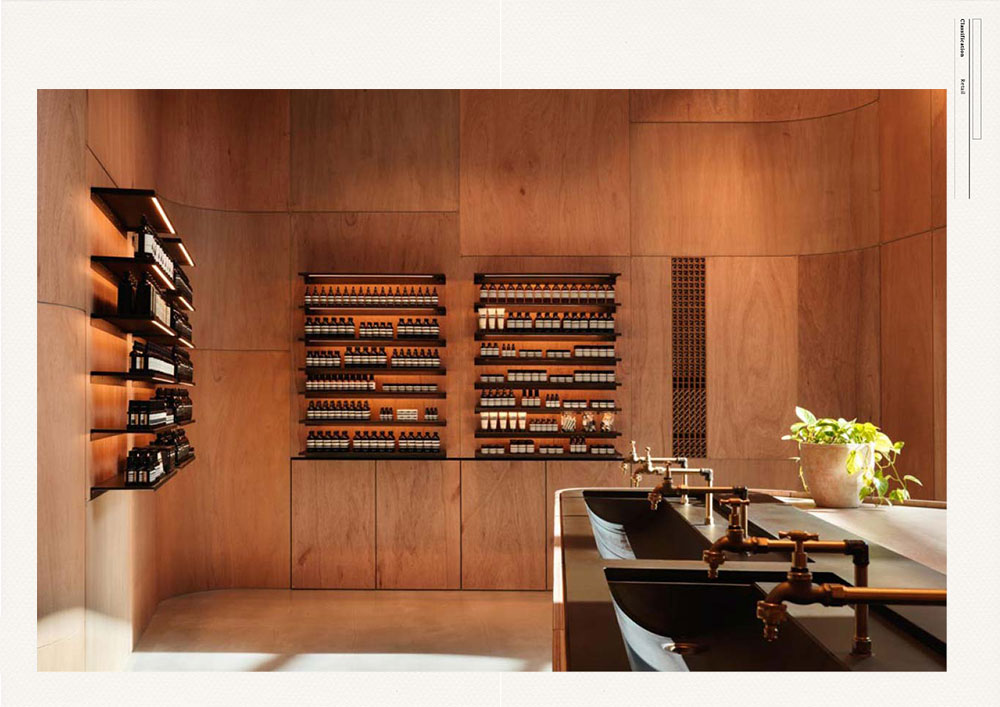 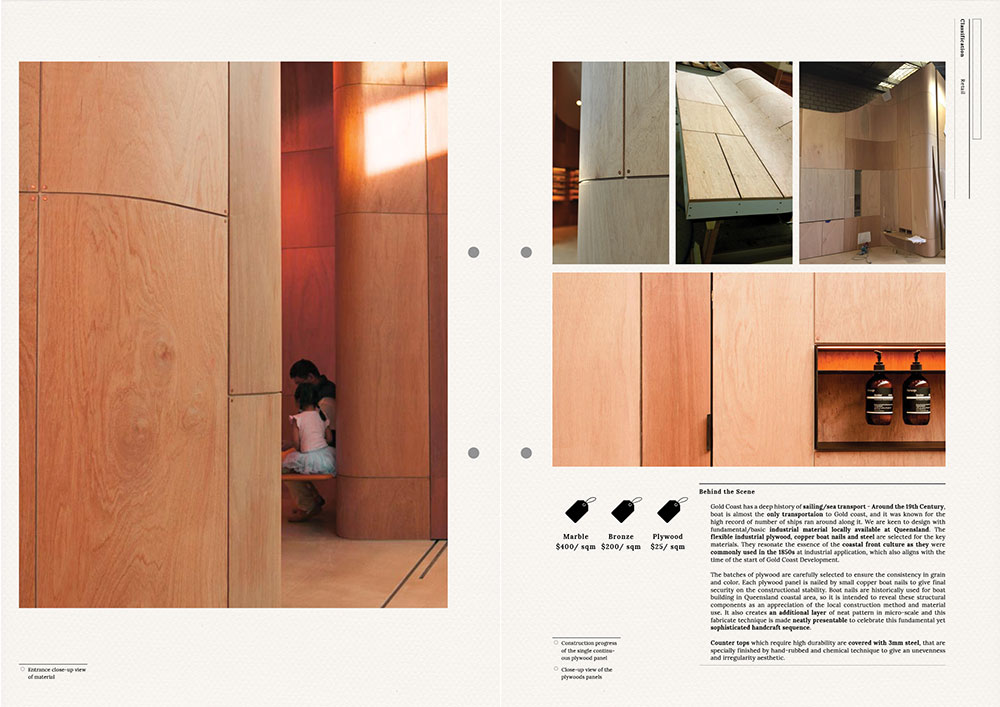 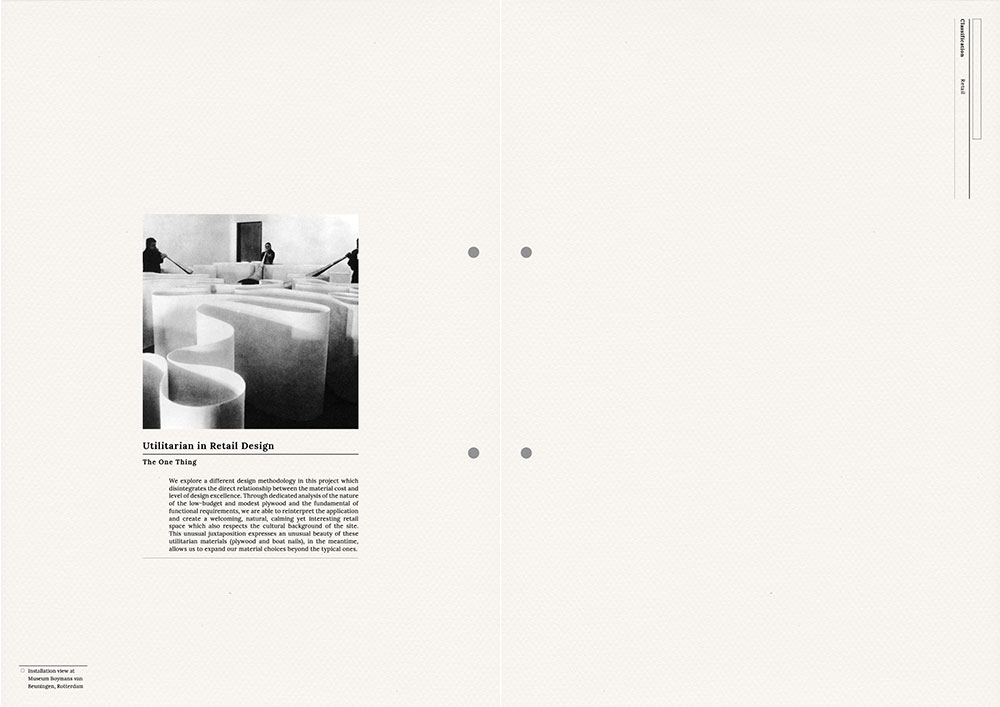 Dynamic Visual Pattern Created by plywood in the raw state and color – The plywood is intended not to be veneered or polished. Its raw state of grain and pattern is revealed in an assembled pattern on the sinuous wall wrapped around the store. The plywood sheets varies in sizes and patterning, creating an subtle variation and texture along the feature wall.
Aesop Pacific Fair Read more 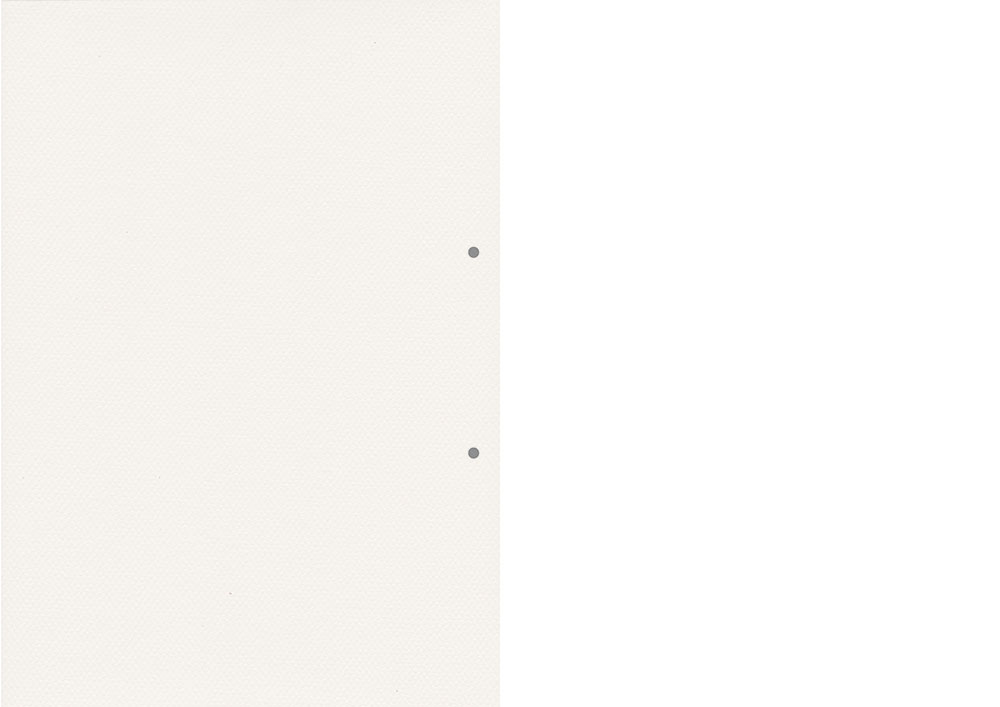 The inspiration has been the local coastal accent of Gold Coast – the vibrant energy and natural beauty surrounding the city.

As well we are keen to design with fundamental/basic Industrial material locally available at Queensland. Three key materials resonates the essence of the coastal front culture, which includes the flexible industrial plywood, copper boat nails and steel, which are commonly used at industrial application in Queensland.

Design is keen to express an unusual beauty of these utilitarian material, and create a welcoming, natural, calming retail space.

Aesop Pacific Fair locates within the new extension of Pacific Fair Shopping Mall. The mall complex is located in between Broadbeach and Mermaid beach.

Just 20mins walk from Pacific Fair, is the Mermaid Beach where the explorer John Oxley first landed in 1802. Before that Gold Coast was remained uninhabited by Europeans.

Gold Coast has a deep history of sailing/sea transport – Gold coast was almost only reachable by boat in 19th Century, until railway line was extended to the town in 1889.  This was because of the rough bush tracks and creek crossings between Brisbane and Southport.

Also during 19th century, Gold Coast was known for its record of ships ran aground along Gold Coast, which one of the most famous shipwrecks was the Scottish Prince. These shipwrecks remains now become beautiful haven for corals. 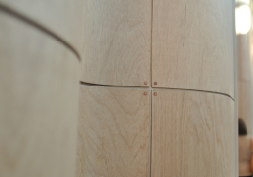 This material is chosen belong of it’s long history to be used to created curved parts, a practice dated back to 1850s which align with the time of the start of Gold Coast Development. Also, it is intended to express the real surface of the plywood without covering it with decorative veneer because we think the real grain and pattern of the plywood already gives a natural beauty of variation and liveliness.

Each plywood panel are nailed by small copper boat nails to give final security on the constructional stability. Boat nails are historically used for boat buildings in Queensland coastal area, so it is intended to reveal these structural component as a appreciation local construction method and material use. 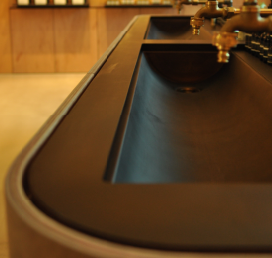 For counter tops which requires high durability are covered with 3mm steel which specially finished by hand-rubbed and chemical technique to give an unevenness and irregularity aesthetic. 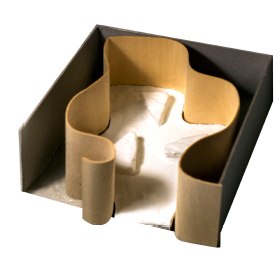 This model shows the earliest material-spatial concept of the store – such that a single continuous plane of plywood panel, curve to flows around the space to form hubs and zones to suit particular retail programs. The Monolithic concrete floor and plaster ceiling formed the top and ground of the store.

With the undulating plywood wall surface, we intend to create an honest expression of plywood assembly line. The overall plywoods patterning are composed with detail attention so that the pattern in fact resonate or facilitate specific retail functional, including cupboards, drawers, shelving. The subtle gaps between each panels are expressed, this create a new meaningful pattern for the wall surface.

In a micro-level – we intend to reveal the copper nails to create an additional layer of neat pattern in another micro-scale. We wish to make this fabricate technique neatly presentable as an appreciation this fundamental yet sophisticated handcraft construction step.

Every day in winter around 12-2p, natural sunlight is directed into the store across the entire space, giving an semi-outdoor store environment unique to Gold Coast Pacific Fair context. It naturally lit up the store and by chances shinning the beautiful Queensland Palm trees at the end. 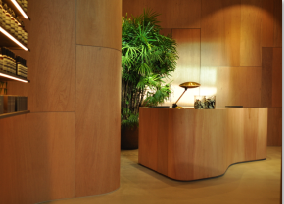